Big they fought! Big they loved! Big their story! 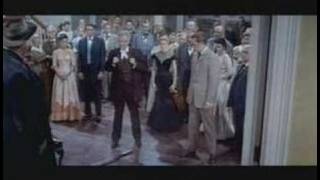 Wyler's powerful Western covers a lot of territory with Gregory Peck a fish out of water as a sea captain who travels west to marry and settle, but finds himself in the middle of a bitter dispute over water rights and a jealous clash with the ranch foreman (Charlton Heston). He also discovers his fiancee isn't who he imagined and finds true romance with the local schoolmistress (Jean Simmons). Folk singer Burl Ives surprised audiences with his performance which garnered him a Best Supporting Actor Oscar.

Wyler's sprawling tale of the West, filled with feuds, vengeance and violent jealousy. In a dry, parched canyon located in the southwest, a rich rancher battles it out with a poor counterpart for water rights. Yet in fact, neither man has control of the precious liquid. It really belongs to Julie Maragon, and she generously allows them both to use it. But when a cultured Easterner arrives with plans to marry the wealthy rancher's daughter, his presence sparks a fresh round of anger and resentment.