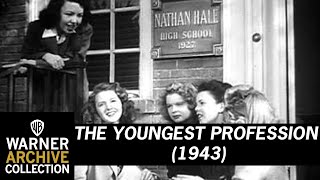 Young star Virginia Weidler plays Joan Lyons, a New York City teenager with an endearing flair for the melodramatic. Joan serves as president of a movie fan club whose members collect celebrity autographs. When Joan learns that Greer Garson (as herself) is in town, she and best friend Patsy (Jean Porter) set out to meet the actress and get her famous signature. The giddy pair enjoy an assortment of fun adventures as they encounter several other MGM stars along the way in this breezy, modest little funny-bone tickler.

In this charming episodic comedy, a giddy group of adolescent girls form a movie-star fan club. Their favorite pastime is collecting the autographs of major stars. Led by their determined president, the gals stalk the streets and train stations of New York in search of big-name stars. Their expeditions are frequently successful, and during the film they garner the John Hancocks of such stars as Lana Turner, Greer Garson, William Powell, Walter Pidgeon, and Robert Taylor.
This product is made-on-demand by the manufacturer using DVD-R recordable media. Almost all DVD players can play DVD-Rs (except for some older models made before 2000) - please consult your owner's manual for formats compatible with your player. These DVD-Rs may not play on all computers or DVD player/recorders. To address this, the manufacturer recommends viewing this product on a DVD player that does not have recording capability.