Elizabeth I's love for the Earl of Essex threatens to destroy her kingdom.

7.8K ratings
Currently Out of Stock: We'll get more as soon as possible
Notify Me When Available
Add to Wishlist
Format:  DVD
sku:  XRI 65228D
Also released as:
The Private Lives of Elizabeth and Essex for $14.39
92% recommend us! 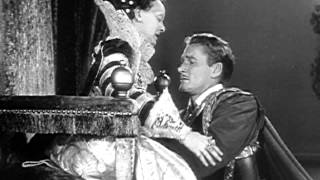 The Private Lives of Elizabeth and Essex - Trailer

Bette Davis and Errol Flynn made The Private Lives of Elizabeth and Essex fascinatingly public, striking sparks in this lavish Technicolor tale of the ill-fated love between the aging Elizabeth I and the dashing Earl of Essex. Thoroughly unglamorous here - eyes and hairline shaved, face painted chalky white - double Academy Award winner Davis exudes such intelligence, energy and ardor that her romance with the decades-younger Essex (Flynn at the peak of his remarkable good looks and athletic verve) is completely believable. Based on Maxwell Anderson's play Elizabeth the Queen and directed by Michael Curtiz, this nominee for five Oscars takes liberties with historical accuracy, but none with dramatic impact. Long may these tempestuous, titled lovers reign!

This legendary dramatization of the relationship between Queen Elizabeth I of England and the Duke of Essex is a spectacle of costume and melodrama, almost as famous today for the offscreen battles as the onscreen fireworks. Bette Davis (OF HUMAN BONDAGE, ALL ABOUT EVE) shines in the role of Elizabeth, while Essex is played by the swashbuckling Errol Flynn (ADVENTURES OF DON JUAN, IN THE WAKE OF THE BOUNTY). Davis was infamously disapproving of her costar's "unprofessional" attitude, while he found her to be insufferably self-important. Nonetheless, the picture is stunning and the tale is timeless--a tragedy of epic proportions. Elizabeth is an aging queen in love with the Earl, but when he sinks the Spanish Armada and squanders ships and loot needed by England, she replaces him with his rival, Sir Walter Raleigh (Vincent Price, HOUSE OF WAX, EDWARD SCISSORHANDS). Essex is furious and retreats to his family's estate, and the Queen must coax him back to court. Their relationship is fraught by sabotage from all sides, and through the intervention of Essex's enemies the two are turned against one another. In the end the Queen is forced to choose between her country and her love for a man whose ambition could be the ruin of a nation.

A Man for All Seasons
$13.10 Super Savings
Add to Cart

20%off
Of Human Bondage
$20 Super Savings
Add to Cart