One good shot deserves another. 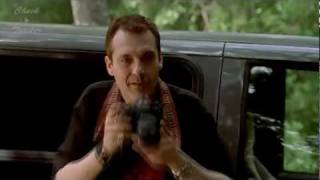 Cole Hauser stars in this riveting revenge thriller as Bo, a decent Montana family man who makes it big as the star of an action-movie franchise. Unfortunately his naivete to the Los Angeles scene makes him an easy target for a cadre of scuzzy tabloid photographers headed by Rex Harper (Tom Sizemore). They ensnare, exploit, entrap, sue, and harass him, attack his car with flashbulbs, and put his little boy into a coma. A Malibu detective (Dennis Farina) shrugs his shoulders at the ineffectuality of the law, leading Bo to take revenge into his own hands.

Anger-management candidate Mel Gibson produced and appears in a blink-or-you'll-miss-it cameo, as do Matthew McConaughey and Chris Rock. Daniel Baldwin is one of the photographers, and he and Sizemore really crank the reprehensible-creep level to a good, old-fashioned high. In the best tradition of violent revengers, the moral compass starts spinning out of control by the end, and you can feel the fury of all the stars involved who have to live life to the constant accompaniment of tabloid lies and flashing cameras. PAPARAZZI is effective, it's fast, and it has a good moody score by Brian Tyler.

The Girl Who Played With Fire (DVD)
$5.40 Super Savings
Add to Cart