He wore America's heart over his! 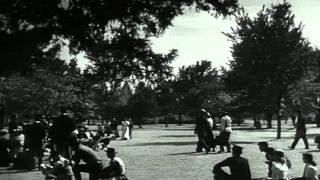 The story of the famed American Indian athlete who was stripped of his Olympic medals for playing professional football.

Burt Lancaster delivers a powerful performance as Jim Thorpe, a Native American athlete who succeeded as an Olympian, on the gridiron and in the diamond.
Hailing from an Oklahoma reservation, Thorpe's prodigious talent won the attention of his coaches at Carlisle College. There he began his road to fame, proving himself one of the most amazing and versatile sports figures ever. He trained in track and field, and won gold medals and set new records at the Olympics... only to be disqualified for having played some small-time professional baseball in order to survive.
Jim Thorpe's achievements did not end there, however, for he afterwards played major-league football and baseball. Unfortunately, however, his life began to fall apart as advancing age began to weaken Thorpe's once-formidable skills...