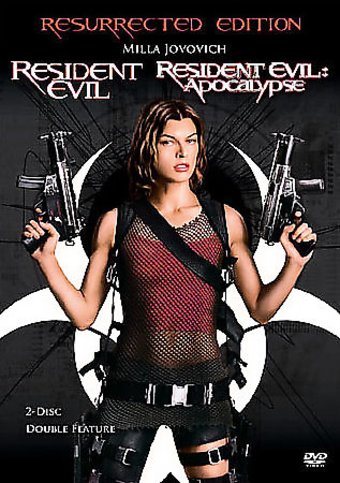 RESIDENT EVIL: The Umbrella Corporation's Vault, a secret facility located deep below Raccoon City, is sabotaged and a deadly virus is stolen. In the mansion that conceals another entrance to the Vault, Alice (Milla Jovovich) lies on the shower floor, naked except for the shower curtain. She can't remember anything but, as she dresses, she recalls memory fragments. Then, masked intruders burst through the windows. They tell Alice she is a Corporation agent living undercover in the mansion. She goes with them into the Vault to discover who sabotaged it. As they penetrate the Vault, trying to get to the Red Queen, the computer system at the heart of the facility, Alice and her confederates face many horrors--dead bodies suspended in water, blood-red flayed dogs, flesh-eating zombies, and "the Licker," a dynamically mutating monster.

RESIDENT EVIL: APOCALYPSE: The lovely Milla Jovovitch is back with a vengeance as amnesiac, genetically-altered zombie ass-kicker, Alice, in this sequel to the 2002 hit film, which is based on the video game. This time around the sinister Umbrella Corporation sends a team of investigators into their destroyed underground lab (the ground-zero of carnage in the previous film) and unwittingly unleash the still-staggering zombies and monsters out into the population of Raccoon City. Soon Umbrella has evacuated all of their own key employees and has shut everyone else inside to be devoured. A mastermind chemist's daughter gets left behind in the confusion, and she is the one ticket out for Alice and a handful of dwindling survivors, including the equally hot, skimpily dressed, and almost-as-tough lady cop, Jill Valentine (Sienna Guillory). There's some nifty motorcycle riding, plenty of bullets and splattering blood, and even a new monster--the hulking, heavily-armored, seriously ugly Nemesis.