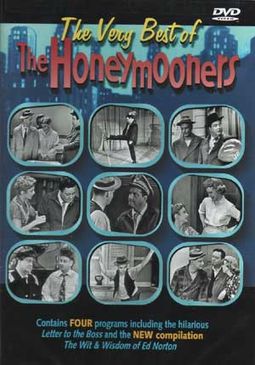 How sweet it is! For the first time, the most memorable moments of one of the greatest comedy shows of all time are available on DVD. Jackie Gleason's ingenious portrayal of bus driver Ralph Kramden, his endearing wife Alice, and their wacky friends, Ed and Trixie Norton, first appeared as a sketch on the "Cavalcade of Stars" (1951), then on "The Jackie Gleason Show" (1952-1955), and finally as the first spin-off series in television history (1955-1956).

The Honeymooners, one of television's all-time success stories, is also the first spin-off series. Starting as a simple sketch on "Cavalcade of Stars" and then becoming a regular skit on "The Jackie Gleason Show", the story finally became it's own series in 1955. This compilation is made up of these early sketches and skits, as well as the best of the famous "lost" episodes from THE HONEYMOONERS FUNNIEST MOMENTS VOLUMES 1 & 2, the new compilation THE WIT & WISDOM OF ED NORTON, and the hilarious "Letter to the Boss" full-length episode.

65%off
The Honeymooners - Lost Episodes: Best of Collection
$5.20 Super Savings
Add to Cart

17%off
The Honeymooners - Christmas Laughter
$12.50 Super Savings
Add to Cart