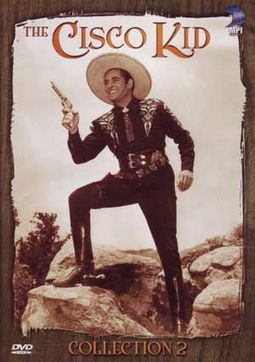 Here's adventure! Here's romance! O. Henry's "famous Robin Hood of the Old West" is back! The Cisco Kid stars Duncan Renaldo as Cisco and Leo Carillo as his faithful sidekick and comic foil, Pancho. One of the first television programs to be filmed in color, this classic Western ran from 1950-1956. Set in 1890's New Mexico, Cisco and Pancho fight corruption and seek justice for the victims of bandits, con men and cattle rustlers. With a combination of humor and compassion for their fellow man, Cisco and Pancho have become legendary to television viewers everywhere.

Episode highlights for The Cisco Kid: Collection Two include: A faithful canine helps Cisco and Pancho capture the men who tried to kill his owner; the discovery of a gun smuggling ring; and the Cisco Kid meets his evil twin. This collection features 20 half-hour episodes of the popular Western series.

The beloved kiddie western The Cisco Kid ran from 1950-1956 and was one of the first television shows to be filmed in color. Loosely based on an O. Henry story, the series follows the adventures of the heroic Cisco Kid (Duncan Renaldo) and his bungling sidekick Pancho (Leo Carillo) as they roam the Wild West righting the wrongs of bandits, con men, and cattle rustlers. This multi-volume set collects 20 half-hour episodes, including "Indian Uprising," "Black Lightning," "Rodeo," and many more.

The Girl Who Played With Fire (DVD)
$5.10 Super Savings
Add to Cart