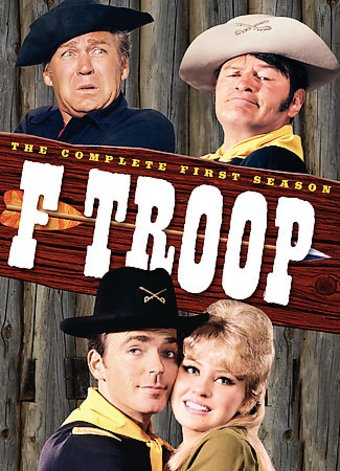 This 1960s sitcom/western followed the bold yet bumbling soldiers of F-Troop at Fort Courage in the days following the Civil War. Led by Captain Parmenter, a naive and wide-eyed soldier promoted to Captain due to an act of accidental heroism, the F-Troop cavalry does its incompetent best to survive in the lawless frontier. Making things easier, Parmenter's second-in-command, the crafty Sgt. O'Rourke, negotiates a deal with the local Hekawi Indians in which the cavalry and the Indians stage mock battles, but actually work together in a mutually profitable Indian souvenir business. The true threat to F-Troop comes from the warlike "Shug" Indians who periodically raid the fort. Bringing a bit of sexpot appeal to the show, sharp-shooting cowgirl Wrangler Jane strives to marry the innocent Captain Parmenter. A lighthearted send-up of the Western genre, F-TROOP, with its irreverent anti-authority attitude, showed its ties to the sixties counterculture, and acted as a precursor to the megahit M*A*S*H.

F-Troop: The Complete First Season
After accidentally leading a cavalry charge into victory, Private Wilton Parmenter becomes a hero and is given command of Fort Courage. Here, his group of cavalrymen bumble through fighting their enemies and working with the local Hekawi Indians to sell items to tourists.