It Happened at the World's Fair

Swinging higher than the space needle with the gals and the songs at the famous Worlds Fair! 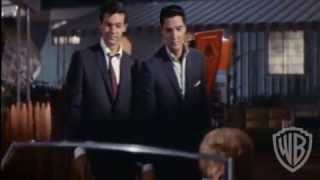 Fun, music and Elvis all happen in this romp boasting one of the best backdrops of any Elvis Presley movie: the 1962 Seattle World's Fair, with its showpiece Space Needle, monorail and more.

The King plays pilot-for-hire Mike, whose hope of starting his own flying business is grounded by the gambling of his co-pilot Danny (Gary Lockwood). The pair hitch to Seattle, where Mike finds romance, Danny finds easy marks and both find problems prior to a Happy Ending. Kurt Russell, star of 1979's Elvis biopic, plays the child who wallops Mike in the shins. And among the 10 songs are I'm Falling in Love Tonight, Relax and the gold record One Broken Heart for Sale. If he's selling, we're buying!

Bush aviator Mike Edwards (Elvis Presley) and copilot Danny Burke (Gary Lockwood) are a couple of thrill-seeking boys who find themselves grounded in Seattle at the annual World's Fair. While Mike and Danny divide their day among roulette wheels and ferris wheels, they also make time to face down bare-knuckled bullies and sing songs. One thing leads to another, and Mike finds himself having to help an abandoned Chinese girl... and wanting to make the acquaintance of a sexy nurse. Contains ten popular songs, including "I'm Falling in Love Tonight," "Relax," and "One Great Heart for Sale."

16%off
The Shakiest Gun in the West
$8.40 Super Savings
Add to Cart

63%off
The Beatles / Elvis Presley
Legends of Rock and Roll: The Beatles Explosion / Elvis...
$5.58 Winter Sale
Add to Cart