Far away from the cruel world. 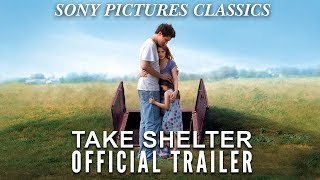 An Ohio family man experiences a series of disturbing visions that gradually begin to weigh on his marriage and community when he begins obsessively constructing a heavily fortified storm shelter. Curtis LaForche (Michael Shannon) has a good life. He lives in a beautiful house with his loving wife, Samantha (Jessica Chastain), and their deaf six-year-old daughter, Hannah (Tova Stewart), but begins to sense that something ominous is on the horizon when the dark clouds of swelling storms begin invading his dreams. Taciturn, Curtis refuses to discuss the dreams with anyone, but feels compelled to dig out a massive storm shelter with the help of a good friend (Shea Whigham). Meanwhile, as Samantha grows increasingly concerned with Curtis' erratic behavior, the local rumor mill begins to churn. Are Curtis' dreams a prophetic omen of things to come, or is he perhaps headed down the same dark road as his mother, who was diagnosed with paranoid schizophrenia when she was approximately the same age that he is now'