An athlete is drawn to the excitement of a demonstration, to a girl and, ultimately, to the cause. 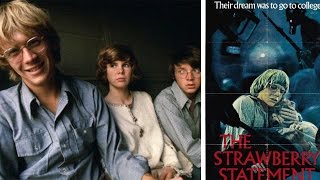 The phone rings in the college president's office. A coed, one of many students in the room, picks up. "We're sorry, the president will not be in today. The university is under new management."

Set to anthemic songs of the time, The Strawberry Statement is both about and from the era of protests that swept campuses in the 1960s and '70s. Bruce Davison plays Simon, an athlete drawn to the excitement of a demonstration, to a girl (Kim Darby) he meets and ultimately, to the cause. The film ends with a police-and-National Guard raid on protesters that gave viewers of the day a knowing unease: student demonstrators had been shot -- some fatally -- at Kent State University and Jackson State College in the month prior to the film's release.

A young activitist student convinces her apathetic boyfriend to become involved in a student strike. An intense look at the political turmoil of the late 1960's that shook America's college campuses. The film's exceptional soundtrack features performances by Neil Young, Crosby, Stills and Nash, Buffy Sainte-Marie, and Lennon and McCartney.

This tale of the explosive 1960s follows an apolitical Columbia University student who turns into an activist.
Unlike many of his peers, Simon is at first more concerned with his classes than with fighting for causes. However, when he becomes attracted to Linda, a pretty radical, his views start changing.
Eventually, Simon participates in the famous Columbia riots that pitted the National Guard against student demonstrators...