If you believe the impossible, the incredible can come true. 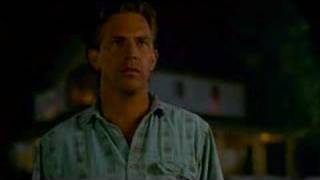 In this film that epitomizes the American love for baseball, Ray Kinsella, a struggling Iowa farmer (Kevin Costner), obeys a mysterious voice in his cornfield that tells him to replace part of his crop with a baseball diamond, resulting in the magical meeting of baseball heroes from the past, including Shoeless Joe Jackson, and the seven other Chicago White Sox players who were suspended for purposefully losing the 1919 World Series. Even after building the diamond, Ray continues to hear voices, and seeks the help of a hermit-like author in sorting out the mystery, which allows the confrontation of ghosts of other sorts.

Kevin Costner plays a former Sixties idealist who runs a farm in Iowa with his wife and young daughter. After hearing a mysterious, heavenly voice one day, Costner turns one of his cornfields into a baseball diamond. Of course, everyone thinks he's crazy, but in time "Shoeless" Joe Jackson and other ghostly outcasts, who had previously languished in a sort of baseball purgatory, show up to play the game they still love. Soon men from all over the country join them at this baseball shrine, some just to play with the greats, others to mend the broken relationships they had with their fathers -- But all are trying to get back in touch with simpler times through the purity of America's grandest game.

Angels In the Outfield
$6 Super Savings
Add to Cart