Two men with nothing in common but the hate that surrounds them. 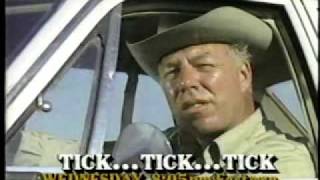 Tensions are taken off the back-burner slow simmer and are placed on full boil in this tale of a black Southern sheriff trapped between the rock and a hard place of two communities separated by skin color and decades of bigotry. Newly elected, Sheriff Jimmy Price (Jim Brown) offers no favors or privileges to either community, and quickly earns the ire of both. Warned by the mayor (Fredric March) against consulting outsiders, Price navigates the tensions until one arrest places him directly in the eye of a hurricane of hate. With only the former sheriff to support him (George Kennedy) Price must try to defuse the tensions before the town explodes.

When Jimmy Price (Jim Brown) wins an upset victory for sheriff, he becomes the first black man ever to hold the job (or any elective office) in anyone's memory in his rural southern county. He also sets off an ominous rumblings as the entire county seems split apart by his presence -- Mayor Parks (Fredric March) offers him the support of his office, but many whites aren't prepared to accept a black man as sheriff, while most of the whites that can accept him aren't saying so too loudly; a lot of older black residents, remembering decades of Jim Crow laws that only lately disappeared, are more confused than encouraged by Price's victory, while younger, more radical black citizens like George Harvey (Bernie Casey) have little use for Price's straight-arrow personality; they expect him to show them favoritism, and when he doesn't, they suspect him of being an nothing but a white man in black skin. Even Price's own wife (Janet MacLachlan) wonders if the cost of his being sheriff is too high. He finds himself alone, walking a tightrope between all of the forces pulling at him, and then the whole situation threatens to explode when he arrests the good-for-nothing son (Bob Random) of a wealthy man from the next county, who has killed a child while driving drunk. Soon the local klavern of the Ku Klux Klan is planning a meeting, and a lynch mob seems to be gathering across the county line to break the prisoner loose and take care of the sheriff. Price finally gets some unexpected help from his embittered predecessor, John Little (George Kennedy) -- Little would like nothing more than to sulk over losing his longtime job, but with his wife's coaxing he realizes that he can't let Price fail without the risk of destroying everything he worked for years to build.

Prison / Prisoners | Gangsters | Racism | Small Towns | Elections
This product is made-on-demand by the manufacturer using DVD-R recordable media. Almost all DVD players can play DVD-Rs (except for some older models made before 2000) - please consult your owner's manual for formats compatible with your player. These DVD-Rs may not play on all computers or DVD player/recorders. To address this, the manufacturer recommends viewing this product on a DVD player that does not have recording capability.

Together Brothers
$19
Add to Cart