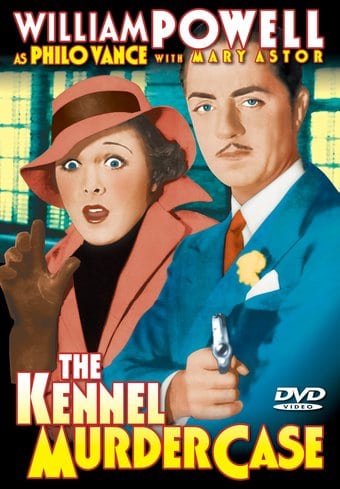 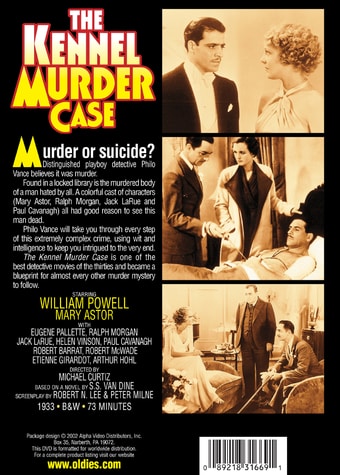 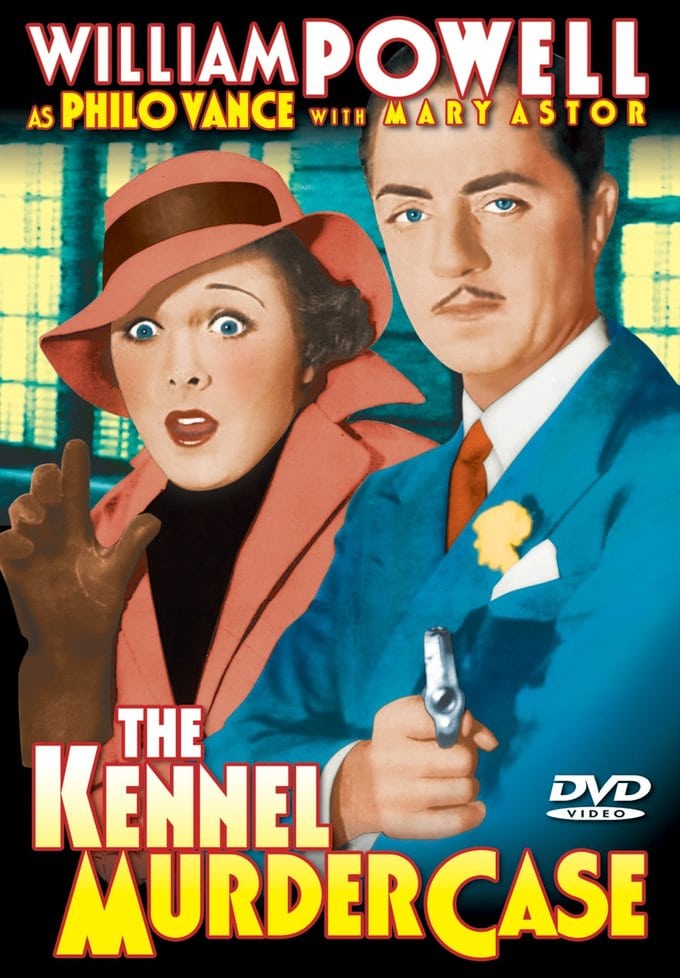 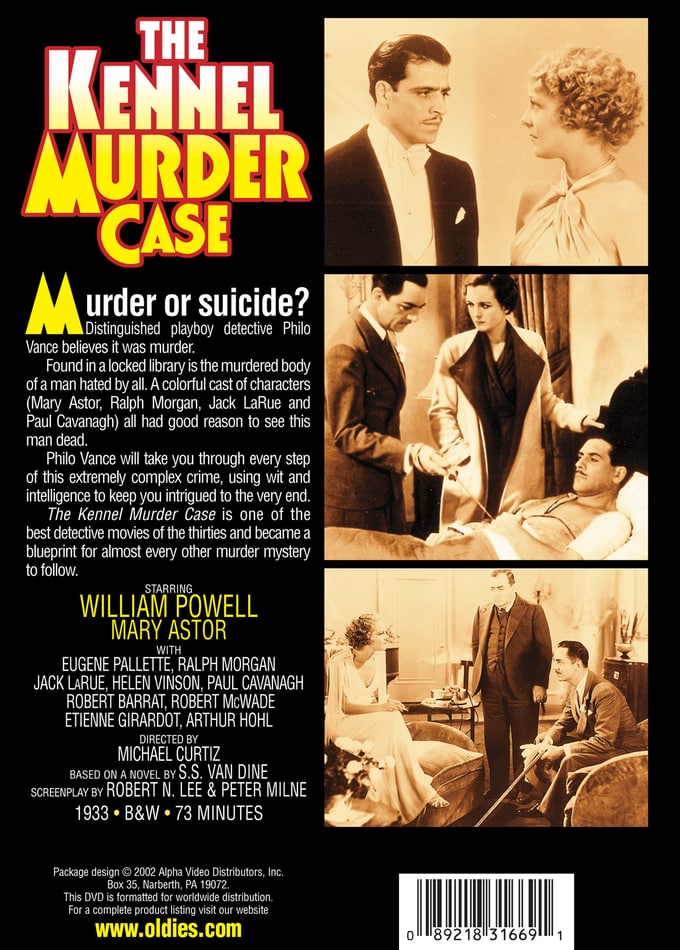 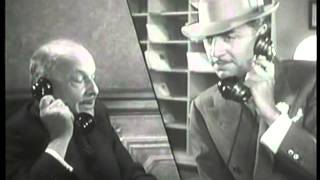 Murder or suicide? Distinguished playboy detective Philo Vance believes it was murder. Found in a locked library is the murdered body of a man hated by all. A colorful cast of characters (Mary Astor, Ralph Morgan, Jack LaRue and Paul Cavanagh) all had good reason to see this man dead. Philo Vance will take you through every step of this extremely complex crime, using wit and intelligence to keep you intrigued to the very end. The Kennel Murder Case is one of the best detective movies of the thirties and became a blueprint for almost every other murder mystery to follow.

William Powell brings detective Philo Vance--the dashing and witty protagonist of a series of popular mystery novels by S.S. Van Dine--to full and vibrant life onscreen in Michael Curtiz's THE KENNEL MURDER CASE. Vance senses foul play at a Long Island kennel club, where two brothers with membership in the club have been killed. The worldly detective's partner in the quest to solve the mystery is the humorously zealous Sergeant Ernest Health (Eugene Pallette). The ever-adaptable Vance manages to indulge his love for canines while trying to deduce who the killer is before he or she strikes again.

Mary Astor and Paul Cavanaugh give enjoyable performances as young lovers who are blissfully oblivious to their potential involvement in the crimes. Powell's Philo Vance is as smooth as vintage cognac, and Curtiz (THE SEA HAWK) flawlessly weaves sophisticated comedy into the thrilling tale of murder and intrigue.

Customer Rating:
Based on 4644 ratings.


THE KENNEL MURDER CASE is one of the best cinema murder mysteries of the 1930s, a delight from start to finish.

William Powell is remembered today as Nick Charles in the Thin Man films, but before that he was suave, debonair Philo Vance in a series of films based on the classic novels by S.S. Van Dine.

As the film opens, you'll find more intrigue at the Long Island Kennel Club than you will at an Agatha Christie British manor. A swanky society crank, Archer Coe (Robert Barrat), seems to go out of his way to insult and bully everybody, including his niece (Mary Astor), his niece's fiancee (Paul Cavanaugh), his personal secretary (Ralph Morgan), his brother (Frank Conroy), his mistress (Helen Vinson), his mistress' boyfriend (Jack LaRue), and his Chinese cook (James Lee). When Coe is found dead in his bedroom, all the doors and windows locked from the inside, everybody thinks he committed suicide - everybody, that is, but our boy Philo, who notices some anomalies in the setting. Not only does Vance have to figure out who killed Coe, though, he also has to figure out how.

Michael Curtiz directed the film, and did a masterful job, keeping the lean film moving swiftly. There isn't a spare second in the film?s brief (under 75 min.) running time, and you'll be laughing and guessing along with Vance until the final frame. Did I say laughing? Yes, there's some good comic relief from Etienne Girardot as a grumpy coroner who finds the escalating body count interfering with his meals ("There's too many people in the world anyway!") and gravel-voiced Eugene Pallette as a clueless detective (faced with a victim who was bludgeoned, stabbed in the back, and then shot in the head, the detective whispers to the coroner, "Is there any chance it was suicide?").

I love this film!


William Powell is fantastic as always, but its the direction by Michael Curtiz that really sets this movie in a class by itself. Great use of scale models to create some tricky camera pans. Good performances from all the cast, including the dogs, and clever plot twists make this a true classic. Only Powell could solve a crime without removing his swanky leather gloves.


This Philo Vance movie has a wonderful plot, and great acting all around. William Powell was definitely at the top of his game in this one.