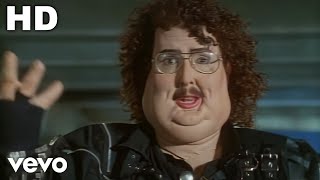 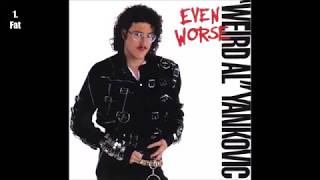 Trust Weird Al Yankovic to name an album "Even Worse" even as his recordings were getting better again. After a bit of a slump, he rebounded in 1988 by making fun of the same old guy again, Michael Jackson. Video played a big part in the success of "I'm Fat," based on "I'm Bad." In fact, one could say it was a whole new ball game for parody artists if they were expected to provide a video with state-of-the-art special effects such as the fat suit Yankovic had designed for himself, which probably cost more than the entire budget of a Homer and Jethro album. There was also a change in the relationship between Yankovic the satirist and his target, Jackson, as the latter star's hold on his audience was beginning to wear thin by the late '80s. The arrogance of "I'm Bad" was perfectly trumped by Yankovic's musical pile of lard, the appeal of the video's visuals clearly not the only ace in the hole. Near the end of the tune, Yankovic gets into a mockery of Jackson's vocal style that is both sublime and ridiculous. This is just the beginning of an album that gets richer as it gets along, with the maestro obviously benefitting from a period of reflection. He doesn't just stick to covers of what was contemporary at the time, perhaps realizing that the shallowness of the music on the radio was not going to result in great hilarity. "I Think I'm a Clone Now" takes us back to Tommy James and the Shondells and is one of Yankovic's best efforts, a perfectly realized satire that manages to come off better than the original, something of a soft rock classic to begin with. Then there is "Twister," which raucously takes the hi-octane filth and funk of the Beastie Boys and weds them to a stupid children's party game. Funster Yankovic seems to be getting practically savage in his attacks, an intensity both appropriate and enjoyable. George Harrison's final and forgettable hit "I've Got My Mind Set on You" gets reborn as "This Song Is Just Six Words Long," Yankovic obviously relishing the opportunity to croon lyrics such as "Can't think of any lyrics." Apparently running on full, Yankovic even manages to shatter all previous barriers and comes up with some funny original material as well. "Good Old Days" is a great idea, using an original number in order to lampoon yet another pop icon, in this case the simpy James Taylor. But it is "Stuck in a Closet With Vanna White" that is the real winner for Yankovic, because this was the first song he wrote that his supposed target audience of 11 year olds actually liked as much or even more than his parodies. Of course, the problem with tracks such as this is they date over the years; a time will come when nobody will remember who Vanna White is, and then listeners will wonder what the big deal is about getting stuck in a closet with her. ~ Eugene Chadbourne