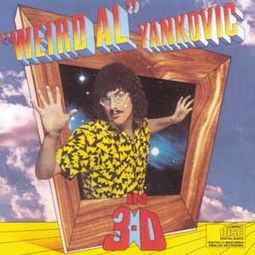 Personnel includes: "Weird Al" Yankovic (vocals, accordion, keyboards); Don Pardo (vocals); Rick Derringer (guitar, mandolin); Steve Jay (guitar, banjo, bass, talking drums); Jim West (guitar); Jim Self (tuba); Jon "Bermuda" Schwartz (drums, percussion); Joel Miller (bongos).
IN 3-D was the second album by novelty king Weird Al Yankovic, and the one that helped establish his claim to the throne. His send-up of Michael Jackson's "Beat It" was a hit, subverting the tune by turning it into "Eat It," a paean to stuffing one's face. His takes on Greg Kihn's "Jeopardy" ("I Lost on Jeopardy") and Survivor's "The Eye of the Tiger" ("Theme from Rocky XIII") are equally tickling. Given that these are parodies of songs popular in the early '80s, the effect is diluted decades later, but there's still some allure for those with an inner 11-year-old.