Batman Beyond - Return of the Joker (Blu-ray) PG-13

The Joke's On You 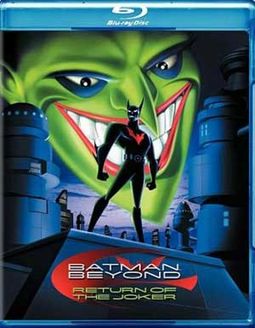 Get email alerts for The Joker
84K ratings
Currently Out of Stock: We'll get more as soon as possible
Notify Me When Available
Add to Wishlist
Format:  Blu-ray
item number:  XHSC
91% recommend us!

The success of BATMAN has lead to an incredible array of different incarnations for the Caped Crusader. Various feature film efforts have emphasized the darker side of Bruce Wayne's alter-ego (Tim Burton and Christopher Nolan's efforts in particular), while the original TV show was a deliriously camp affair. The animated BATMAN BEYOND TV show proves to be an entertaining addition to the canon, and the esteem in which it is held has resulted in a full-length animated escapade for the superhero, titled THE RETURN OF THE JOKER. With Bruce Wayne retired, Terry McGinnis takes up the Batman mantle, and dons the famous costume to go into battle with arch enemy, The Joker. When The Joker goes after the aging Wayne and almost kills him, McGinnis swears to bring down the fiendish villain once and for all. His quest reveals some fascinating facts about the history of the Batman/Joker rivalry, and leads to a valuable and exciting new chapter in the Batman saga.

Superman/Shazam!: The Return of Black Adam
$14.50
Add to Cart

The Lion Guard: Return of the Roar
$10
Add to Cart

Batman Beyond: Return of the Joker / Batman: Mystery of the...
$10
Add to Cart