What the Dickens have they done to Scrooge? 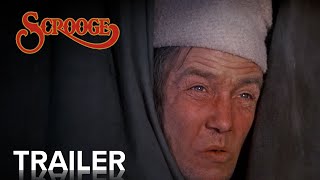 Albert Finney shines as the title character in this musical version of Charles Dickens' timeless tale of Ebenezer Scrooge, a lonely miser who is visited on Christmas Eve by three spirits who teach him lessons of love and giving. Fun choreography, rich set design, memorable songs, and a distinguished supporting cast (led by Sir Alec Guinness as Jacob Marley's ghost) lend considerable clout to this perennial favorite.

A musical re-telling of Charles Dickens' Christmas classic about the miserly Ebenezer Scrooge, who's forced to face his unpleasant past, present and future via three ghosts. As a result, Scrooge undergoes a major transformation, and his Christmas spirit is restored. Songs include "The Beautiful Day," "Thank You Very Much," and "A Christmas Carol."