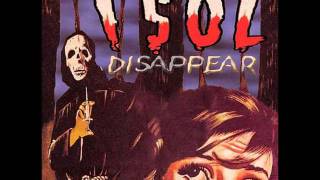 TSOL: Jack Grisham (vocals, piano); Ron Emory (guitar, background vocals); Mike Roche (bass); Jay O'Brien (drums).
Additional personnel includes: Alan Morphew (trumpet); Pat O'Leary (background vocals).
Recorded at Track Record Studios, North Hollywood, California.
Personnel: Ron Emory (vocals, guitar); Jack Grisham (vocals, piano); Alan Morphew (trumpet); Jay O'Brian (drums); Pat O'Leary (background vocals).
Recording information: Track Record, North Hollywood, CA.
The story continues, and for those of you who have lost the plot, this is the third incarnation of TSOL, a dead ringer for the original one, bar the inclusion of new drummer Jay O'Brien into the old lineup of vocalist Jack Grisham, guitarist/vocalist Ron Emory, and bassist Mike Roche. The sound, too, is more reminiscent of yore than the mach-two model, and returns the group to its previous punk roots, or in some cases, punk's roots. Oddly enough, the first song on the record, "Sodomy," is straight out of the Sex Pistols' handbook, so much so that Steve Jones is already spending the expected royalty check. The Dead Kennedys are also checking their bank balance, expecting to see a bonus from "Crybaby," but then the group settles down and starts slamming out the kind of music you expect from TSOL. Obnoxious, pounding, darkly melodic, fierce, and fiery, this is the seminal sound behind the band's legendary status. Emory's trademark death rock riffs seep around the edges, interspersed with punk rock kicks and rockabilly licks. At its best, TSOL were dangerously infectious, and on Disappear it easily reaches these spiraling heights again, with a clutch of catchy numbers coming so fast and furious in the center of the album that the songs become almost a blur, a perfect set that barely pauses for breath. Which makes "Renounce" all the more disconcerting, not just for the slow, jangly, acoustic intro, but in its heavy debt to the Buzzcocks. Equally unexpected is the horn solos, piano parts, and vocal samples garnishing the record, but even all that pales next to "Society," where Brit pop meets death rock -- think the bastard offspring of Jarvis Cocker and Siouxsie Sue, brilliant. The album may be titled Disappear, but TSOL have in reality reappeared in all its former glory. ~ Jo-Ann Greene