The Sonics This Is The Sonics

Rolling Stone: 4 stars out of 5 -- "Their take on the Kinks' 'The Hard Way' out-rocks the original, echoing the Brits' more loutish 'You Really Got Me.'" 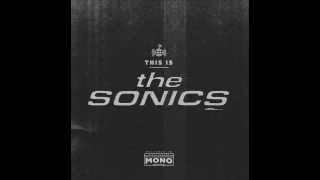 The Sonics - I Don't Need No Doctor (Music Video) 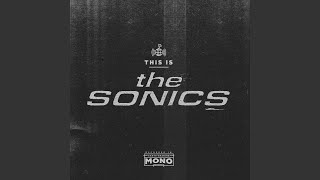 Be A Woman (Music Video)

Rolling Stone
4 stars out of 5 -- "Their take on the Kinks' 'The Hard Way' out-rocks the original, echoing the Brits' more loutish 'You Really Got Me.'"
Pitchfork (Website) - "Together they lock into a single-minded, almost monomaniacal unit, pulverizing numbers like 'Be a Woman' and 'Spend the Night' into lumps of distorted, house-wrecking lust."

Personnel: Larry Parypa (vocals, guitar); Rob Lind (vocals, harp, saxophone); Gerry Roslie (vocals, piano, keyboards); Dusty Watson (vocals, drums); Freddie Dennis (vocals); Jim Diamond (piano, keyboards).
Audio Mixer: Jim Diamond .
Recording information: Soundhouse Studios, Seattle, WA.
Being the toughest band on Earth in 1965 was clearly something to be proud of, but what does that mean 50 years later? Just because you could reliably kick a field goal or run a four-minute mile when you were 18 doesn't mean you'll be expected to do the same at your high-school reunion five decades on. But musicians are often judged by the standards they set in their youth, and in the 21st century, the Sonics, the frantic and ferocious garage rock band from Tacoma, Washington, whose records were among the most explosive to emerge in the '60s, have decided to make a new album and show the world how they're holding up. And the good news is, they're holding up remarkably well -- This Is the Sonics is a joyously raw blast of full-bore garage rock stomp that comes perilously close to matching the furious energy of their iconic Etiquette Records sides from the '60s, and if these guys no longer sound like teenagers whacked out on coffee and beer, they're clearly running on high-test rock & roll passion, and their formula still works like a charm. The Sonics were lucky to have a talented and sympathetic hand in the studio, Detroiter Jim Diamond, who has been recording full-on garage-influenced stuff for the better part of two decades, and his monophonic recording and mix document the band's sound with an ideal balance of clarity and vintage analog growl. But that wouldn't mean a thing if the Sonics couldn't deliver, and amazingly, This Is the Sonics lives up to its name in every sense. Gerry Roslie's vocals still sound like a blast furnace that's been taught to impersonate Little Richard (and his keyboard work is more than up to snuff), guitarist Larry Parypa wails hard whether he's chopping out a rhythm or tearing up a solo, and Rob Lind's sax pours out a glorious honk that cuts through the surrounding fracas like a knife. The band's new rhythm section, bassist Freddie Dennis and drummer Dusty Watson, are a perfect fit for the Sonics, muscular and fiery without getting too flashy, and if "Save the Planet" ("It's the only one with beer") isn't exactly a classic, most of the other new tunes are just what you love and demand from the Sonics (especially the brazen "Bad Betty" and "The Hard Way"), and "I Don't Need No Doctor," "Leaving Here," and "You Can't Judge a Book by the Cover" show they know what to do with an R&B classic. This Is the Sonics is an outstanding return to duty for one of the great primal rock & roll bands of the '60s, and if they don't sound like kids, the flame that fueled their best discs is still burning bright, and they're louder, crazier, and wilder than most bands a third their age. Outstanding work, though the Sonics are urged not to wait another few decades before they try this again. ~ Mark Deming

The Sonics
Here Are the Sonics!!! [Pocket Version]
$10
Add to Cart

The Sonics
Here Are the Sonics!!! [Pocket Version]
$10
Add to Cart