To Die For R

All she wanted was a little attention. 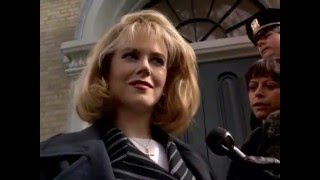 Premiere - 04/01/1996
"...[Kidman is] breathtaking....Kudos to Van Sant..." - Recommended
Rolling Stone - 10/19/1995
"...Prime social satire and outrageous fun....Sparked by a volcanically sexy and richly comic performance..."
Entertainment Weekly - 04/19/1996
"...Kidman is like a Roman candle....Directed with comic brightness..." -- Rating: B+
Variety - 05/29/1995
"...TO DIE FOR delivers continuous pinpricks of irreverent humor and subversive cultural commentary. Witty, energetic and splendidly acted..."
Los Angeles Times - 09/27/1995
"...A smart black comedy that skewers America's fatal fascination with television and celebrity....Told with a panache that extends from the opening credits to its closing frames, TO DIE FOR plays its themes for everything they're worth..."
Chicago Sun-Times - 10/06/1995
"...TO DIE FOR is the kind of movie that's merciless with its characters, and Kidman is superb....The film is filled with perfect character studies..."
Uncut - 11/01/2007
4 stars out of 5 -- "Like the finest satire, TO DIE FOR is no-prisoners nasty, very funny and both exaggerated and true."
Sight and Sound - 11/01/2007
"Nicole Kidman gives a peerless performance....Van Sant's non-linear faux-documentary narrative, with its tabloid-news-style talking heads and sly gags comes up fresh as a daisy after a dozen years."
Ultimate DVD - 10/01/2007
4 stars out of 5 -- "[The film] showcases some accomplished performances....These combine with some solid direction from Van Sant to result in a juicy little guilty pleasure."

A cable-TV weather girl who'll do anything to become a celebrity seduces a high school student and convinces him to kill her go-nowhere husband in this black comedy. Gus Van Sant's (MY OWN PRIVATE IDAHO, ELEPHANT) sly satire on America's tabloid mentality is loosely adapted from Joyce Maynard's chronicle of the real-life tale of husband-killer Pamela Smart.

Suzanne Stone is a blond, glamorous, ambitious and ruthless TV weatherperson in Little Hope, N.H. She's also completely obsessed with both the notion of celebrity, and with becoming one -- no matter what she has to do. But when Larry, Suzanne's blue-collar husband, naively suggests she give up her career to raise a family, Suzanne realizes that Larry is merely an obstacle on the road to fame. She then comes up with an idea: manipulate three local teens (emotionally and physically) into killing Larry. The resulting tabloid media coverage brings Suzanne the notoriety she's always desired, and she enjoys every moment. But what Suzanne doesn't know is that small-mindedness is about to contribute to her downfall.

37%off
The Positively True Adventures of the Alleged Texas...
$6.29 Winter Sale
Add to Cart