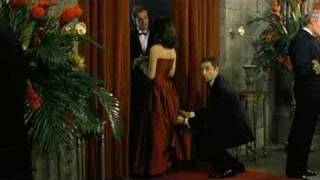 When the British government fears that a plan is afoot to steal the royal family's beloved crown jewels from their secure home in the Tower of London, secret agent Johnny English (Rowan Atkinson) is assigned to the case. Unfortunately, English isn't the British Secret Service's first choice for the job; he's just the only secret agent that is still alive. Even though English dreams of being a suave, debonair agent and has only the best intentions, the hapless Brit continually makes matters worse as he tries to save his country from falling into the clutches of French prison mogul Pascal Sauvage, played by John Malkovich. Among other things, English misuses secret agent gadgets, inadvertently leaks his plans to the bad guys, takes the most inopportune route into Sauvage's castle, and generally makes silly mistakes--and somehow gets away with it. Physical comedian Atkinson, best known as Mr. Bean, shines in this film, which was directed by Peter Howitt (SLIDING DOORS). JOHNNY ENGLISH also features British comedian Ben Miller as Bough, English's mild-mannered, but surprisingly effective sidekick from the agency. Australian singer and actress Natalie Imbruglia makes her feature film debut as Special Agent Lorna Campbell.