935K ratings
Out of Print: Future availability is unknown
Notify Me When Available
Add to Wishlist
Format:  DVD
sku:  JAW8
92% recommend us! 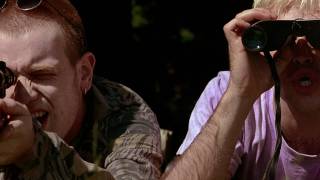 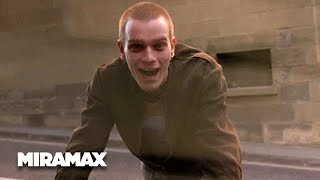 "We called him Mother Superior on account of the length of his habit."
- Renton (EWAN McGREGOR), about one of his dope-dealing friends.
"Choose life. Choose a job. Chose a career. Choose a family. Choose a... big television, choose washing machines, cars, compact disc players and electrical tin openers. Choose good health, low cholesterol and dental insurance. Choose fixed- income mortgage repayments. Choose a starter home. Choose your friends.... But why would I want to do a thing like that' I chose not to choose life: I chose something else. And the reasons' There are no reasons. Who needs reasons when you've got heroin'"
- Renton (EWAN McGREGOR)
"[Begbie] didn't do drugs, he did people."
- Renton (EWAN McGREGOR)
"You know Rents, for a vegetarian, you're a mean shot"
- Sick Boy (Johnny Lee Miller)

A kinetic, intimate look inside the subculture of heroin abuse, this acclaimed adaptation of Irvine Welsh's novel follows the misadventures of Renton, a brash, twenty-something Edinburgh junkie, and his nihilistic chums Tommy, Spud, Sick Boy and Begbie. Alternately comic and off-putting, the film ultimately comes down to Renton's choice between self-destruction or life. The stellar soundtrack should not be missed.

Dr. Strangelove Or: How I Learned to Stop Worrying and Love...
$13.10 Super Savings
Add to Cart