A bank worker steals cash from the bank on Friday and, to keep his wife from leaving, must return the money before it is discovered missing on Monday. 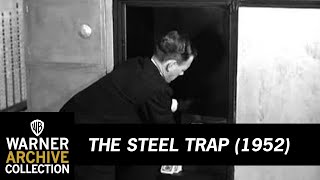 Thrillmaster Andrew Stone re-teams Shadow of a Doubt's Joseph Cotten and Teresa Wright for this bank job drama about a man who goes all out for the big score, only to discover he's risked losing all.

Diligent, observant and bright assistant bank manager James Osborne (Cotten) knows all the ins and outs of his bank -- including a few loopholes wary upper management has missed. Despairing of the suburban treadmill, Osborne seizes on U.S.-Brazil extradition (or lack thereof) to provide his "get out of jail free card." His daring plan: rob the bank during working hours on Friday and be safely in Brazil by the time the cash is found missing Monday morn. Unfortunately, Osborne's wife Laurie (Wright) does not applaud his daring as imagined. She leaves him and, in order to get her back, Osborne must now enact an even more daring plan: break back into the bank and return the purloined tender before Monday morning.

Joseph Cotten plays a assistant bank manager who steals $500,000 from the safe late on a Friday. He plans to fly to Brazil with his wife (Teresa Wright) and child. They get as far as New Orleans; the wife finds out about the robbery and walks out on Cotten. Stricken by guilt, Cotten must now return to his home town and replace the money before he's found out on Monday morning. Writer/director Andrew L. Stone smooths out the unrealistic elements of THE STEEL TRAP by filming extensively at real locations.

Thriller | Crime | Families | Flying | Money
This product is made-on-demand by the manufacturer using DVD-R recordable media. Almost all DVD players can play DVD-Rs (except for some older models made before 2000) - please consult your owner's manual for formats compatible with your player. These DVD-Rs may not play on all computers or DVD player/recorders. To address this, the manufacturer recommends viewing this product on a DVD player that does not have recording capability.