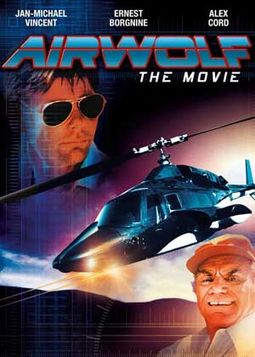 When the helicopter is purloined by Libyan mercenaries, Michael 'Archangel' Coldsmith Briggs III (Alex Cord), project director of the CIA, enlists the help of Vietnam veteran Stringfellow Hawke (Jan-Michael Vincent) and his father's best friend Dominic Santini (Ernest Borgnine) in an attempt to recover the Airwolf. A deadly mission takes them to the Middle East, where they come face to face with the enemy in a dirty battle to repossess the deadliest aerial weapon ever made.

AIRWOLF stars Jan-Michael Vincent as Stringfellow Hawke, a reclusive helicopter pilot. Airwolf itself is a super-powered copter that has been stolen by its creator (David Hemmings) and sold to the Libyans. Hawke agrees to retrieve Airwolf on one condition: That the US government effect the release of his brother, who has been missing in Vietnam for fourteen years. Inasmuch as the government fails in their end of the bargain, Hawke keeps Airwolf himself, thereby establishing the premise for the subsequent long-running (1984-1988) TV series. This two-hour AIRWOLF opener originally aired on January 22, 1984.