You’ll believe it when you see it! 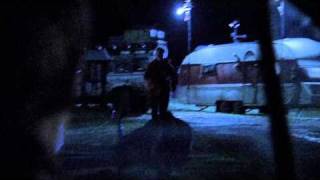 Three student filmmakers venture into the most isolated region of Norway on a mission to confront a notorious bear poacher, and discover that the elusive hunter's true prey is something far more extraordinary. Though Kalle, Thomas, and Johanna thought they were pursuing a criminal, after locating Hans (Otto Jespersen) with the help of some local hunters, they learn that bears are not his true target but a mere smokescreen to obscure what he's really after -- trolls. A secret government agency has been conspiring to cover up the existence of these massive monsters, but occasionally the trolls manage to break their containment area. When that happens, it falls on Hans to capture the creatures at all costs. Trolls are highly sensitive to sunlight, and traditional weapons only make them angry. Instead of carrying a gun, Hans carries an enormous UV light capable of stopping even the fiercest of trolls dead in its tracks. The only way that humans can travel in the area undetected is to cover their bodies in a foul-smelling concoction that makes them invisible to the troll's highly developed sense of smell. Lately, the long hours and grueling work conditions have been taking their toll on Hans, so when the student filmmakers show up looking for a good story, he decides that it's time for the truth to come out, no matter what the cost. Now, if the group can just survive long enough to get their incredible footage to the outside world, they could be responsible for revealing the most impressive cryptozoological discovery in the history of humankind.

The Thanksgiving Treasure / The House Without a Christmas... (DVD)
$13 Super Savings
Add to Cart