Record Collector (magazine): 4 stars out of 5 -- "[This is the] ultimate consolidation of her unquenchable spirit and uniquely idiosyncratic talent." 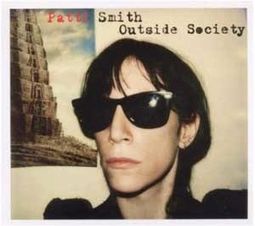 Rolling Stone - p.70
4 stars out of 5 -- "The mortality meditation 'Beneath the Southern Cross' and the ragged string-band cover of 'Smells Like Teen Spirit' stand with her greatest moments."
Uncut - p.100
4 stars out of 5 -- "Her music retains its strangeness, still crackles with life and possibility..."
Record Collector (magazine) - p.102
4 stars out of 5 -- "[This is the] ultimate consolidation of her unquenchable spirit and uniquely idiosyncratic talent."

Photographer: Lynn Goldsmith.
Outside Society is a career-spanning, 18-track, single-disc overview of Patti Smith's recorded career for both Arista and Columbia Records. It includes tracks from 11 albums, including the radio edits of "Lo and Beholden" and her version of "Smells Like Teen Spirit." It also contains her defining hit, "Because the Night," (co-written with Bruce Springsteen) as well as other notable cuts, including "Dancing Barefoot," her signature readings of Van Morrison's "Gloria," and the Byrds' "So You Wanna Be a Rock 'N' Roll Star," and "People Have the Power."

Bruce Springsteen
The Promise: The Making of Darkness on the Edge of Town...
$37
Add to Cart
(10+)