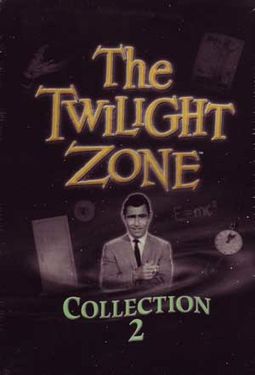 This 9 disc, 34 episode boxed-set completes the collection of shows started by TWILIGHT ZONE: VOLUME 1. Featured episodes include "What You Need," "Midnight Sun," "Living Doll," "The After Hours," and many more. Enter the strange, eerie, and sometimes scary world of a show that has entertained viewers for decades after its original inception.

Rod Serling's classic TV exploration of the uncanny, the unknown, and the unforgettable takes you beyond the deepest realms of imagination! Filled with twists, turns, and compelling characters, this legendary series has remained continuously on the air since its initial run and remains as fascinating, frightening, and thoroughly entertaining for viewers today. Each set contains nine DVDs; Collection #2 features Volumes 10-18, 34 episodes to tingle your spine including "The After Hours," "What You Need," The Midnight Sun" and "Living Doll." So pull up a seat and brace yourself for a fantastic voyage into...The Twilight Zone!