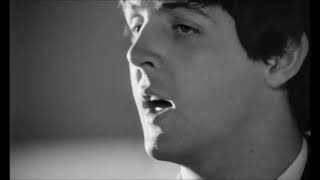 The Beatles - And I Love Her (Official Music Video) 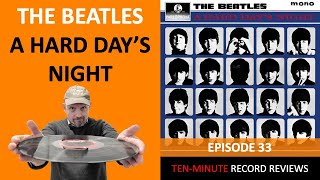 Considering the quality of the original material on With the Beatles, it shouldn't have been a surprise that Lennon & McCartney decided to devote their third album to all-original material. Nevertheless, that decision still impresses, not only because the album is so strong, but because it was written and recorded at a time when the Beatles were constantly touring, giving regular BBC concerts, appearing on television and releasing non-LP singles and EPs, as well as filming their first motion picture. In that context, the achievement of A Hard Day's Night is all the more astounding. Not only was the record the de facto soundtrack for their movie, not only was it filled with nothing but Lennon-McCartney originals, but it found the Beatles truly coming into their own as a band by performing a uniformly excellent set of songs. All of the disparate influences on their first two albums had coalesced into a bright, joyous, original sound filled with ringing guitars and irresistible melodies. They had certainly found their musical voice before, but A Hard Day's Night is where it became mythical. In just a few years, they made more adventurous and accomplished albums, but this is the sound of Beatlemania in all of its giddy glory -- for better and for worse, this is the definitive Beatles album, the one every group throughout the ages has used as a blueprint. Listening to the album, it's easy to see why. Decades after its original release, A Hard Day's Night's punchy blend of propulsive rhythms, jangly guitars, and infectious, singalong melodies is remarkably fresh. There's something intrinsically exciting in the sound of the album itself, something to keep the record vital years after it was recorded. Even more impressive are the songs themselves. Not only are the melodies forceful and memorable, but Lennon and McCartney have found a number of variations to their basic Merseybeat style, from the brash "Can't Buy Me Love" and "Any Time at All," through the gentle "If I Fell," to the tough folk-rock of "I'll Cry Instead." It's possible to hear both songwriters develop their own distinctive voices on the album, but overall, A Hard Day's Night stands as a testament to their collaborative powers -- never again did they write together so well or so easily, choosing to pursue their own routes. John and Paul must have known how strong the material is -- they threw the pleasant trifle "I'm Happy Just to Dance with You" to George and didn't give anything to Ringo to sing. That may have been a little selfish, but it hardly hurts the album, since everything on the record is performed with genuine glee and excitement. It's the pinnacle of their early years. ~ Stephen Thomas Erlewine

20%off
The Beatles
Beatles For Sale: Album Cover Magnet
$3.98 on Sale
Add to Cart

60%off
The Beatles
Abbey Road Album Cover Magnet
$3.98 on Sale
Add to Cart

The Beatles
Revolver Espresso Mug
$5.98 on Sale
Add to Cart