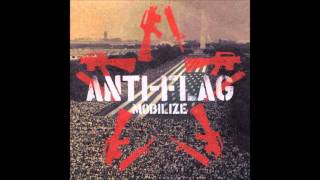 This includes a bonus disc.
Anti-Flag: Chris Head, Justin Sane (vocals, guitar); #2 Chris (bass, background vocals); Pat Thetic (drums, background vocals).
Recorded at Sound Scape, McKeesport, Pennsylvania and The Mr. Roboto Project 1 Studio, Pittsburgh, Pennsylvania.
Personnel: Justin Sane, Chris Head (vocals, guitar); Pat Thetic (vocals, drums); Chris #2, Spaz (vocals).
Liner Note Author: Anti-Flag.
Recording information: Mr. Roboto Project 1, Pittsburgh, PA (09/??/2001-12/01/2001); Soundscape Studio, McKeesport, PA (09/??/2001-12/01/2001).
Political punk rock has always felt pressure from society because of the extreme reaction many have to extreme political ideas. A good example of this situation was what Anti-Flag went through in the wake of the September 11th tragedy. Their name was viewed as "un-American" by many, and they found themselves on the receiving end of a minor album ban. On top of that, their anti-violence stance was very unpopular in the revenge-happy environment immediately following the attacks. Although it wasn't nearly as widespread as what some musicians had felt, it was enough to inspire them to address the issue on Mobilize, the first album they released since the incident. Brimming with anger, "911 for Peace" is one of the most literate songs to address the topic yet. Where some musicians simply mourned for the city or called out for blood, Anti-Flag took a stand and called for an end to the "eye for an eye" mentality that hit the nation. Of course the song never really took off (it was released for free on their website), but it fits in nicely with the punk rock anthems following it on the album. They address a number of other political topics throughout the album, including corporations, abortion, and carefully choosing who builds the future. Not every song has the insightful lyrics of "911 for Peace," but Justin Sane was never a Jello Biafra waiting to be discovered. Instead, the approach is similar to Ian MacKaye's Embrace project, spelling out the message with little room for subtlety or humor. But this is much more in tune with the innovators of punk rock, making hundreds of candy-coated bands floating around the underground just look silly. On top of that, the band writes songs that are easier to remember and absorb than anything it's done before. The album isn't a landmark, but instead it is a solid document from a band that continues to improve with every album. ~ Bradley Torreano

Anti-Flag
Die for the Government
$13.60
Add to Cart