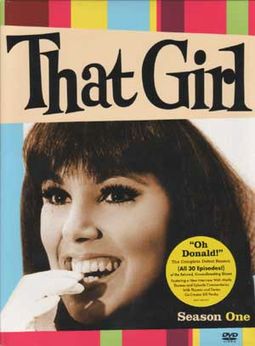 Before "The Mary Tyler Moore Show," "Murphy Brown" and "Ally McBeal," there was "That Girl." The groundbreaking situation comedy starring Marlo Thomas, which debuted in 1966, was the first to feature a young, single, independent female character. Ann Marie's pursuit of her dream - to be an actress in New York - and her adventures with her boyfriend, Donald Hollinger (Ted Bessell), and her doting parents (Lew Parker and Rosemary DeCamp) became wildly popular and brought Thomas four Emmy nominations and a Golden Globe Award. Here are all 30 episodes from the historic first season, along with rare bonus footage and interviews.

Starring an endearing Marlo Thomas as Ann Marie, the "girl" of the title, THAT GIRL was a classic TV show and a forerunner of the MARY TYLER MOORE SHOW in its portrayal of an independent woman determined to make it on her own. Living in New York City and attempting to start a career as an actress, Ann Marie also finds time in her busy schedule for her boyfriend, Don (Ted Bessell). Lew Parker plays Ann Marie's father, and Dabney Coleman costars as well.