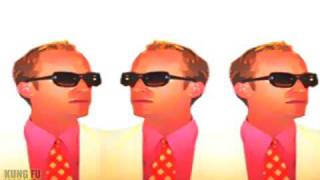 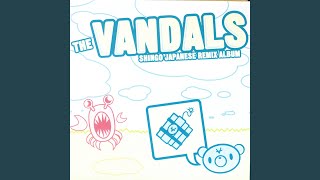 The Vandals: Dave Quackenbush (vocals); Warren Fitzgerald (guitar); Joe Escalante (bass guitar); Josh Freese (drums).
Veteran SoCal outfit the Vandals have built up a solid reputation for pioneering pop-punk since their formation in the early 1980s. Here they offer up tracks from their 2004 album, HOLLYWOOD POTATO CHIP, and its predecessor, 2002's INTERNET DATING SUPERSTUDS, to Japanese producer and DJ Shingo Asari for dissection and reassembly. Though an exercise of this sort is not to be taken lightly, the results are predictably bizarre, mostly intriguing, and often an improvement on the originals--POTATO CHIP's "How They Getcha" benefits from a hip-hop makeover, while SUPERSTUDS' 4.3.2.1.-1 settles comfortably into its wackily sympathetic rhythm track, and "Little Weirdo" transcends its double-time punk origins to become a Beck-type pop tour-de-force.