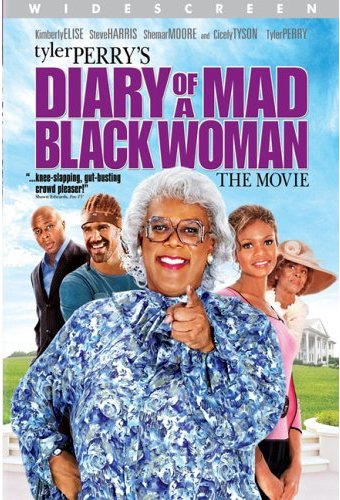 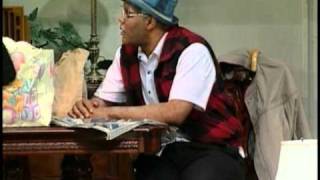 Genres and genders collide in this unusual mix of Christian soap opera and raunchy cross-dressing comedy. Tyler Perry adapts his own play--one of a series wherein he personally portrays Grandma Madea, an overweight, no-nonsense, old, Christian, African-American woman. In DIARY OF A MAD BLACK WOMAN, the main character is Helen (Kimberly Elise), whose wealthy, abusive husband Charles (Steve Harris) kicks her out of their mansion after 18 years of marriage. Luckily Grandma Madea is there to offer some tough love. When a gangster's bullet later makes Charles a cripple, Helen has to decide between love (i.e. wreaking Madea-sanctioned old testament vengeance) and Christian duty. The movie then progresses in two directions: the well-acted dramatic side, with Helen getting her life together thanks to the love of the dreamy Orlando (YOUNG AND THE RESTLESS star Shemar Moore) and her hospitalized momma (Cecily Tyson); and the go-for-broke humor side, with Harris whooping it up in unfettered glee as the chainsaw-wielding, pistol-packing Madea (he also plays several other roles). Whatever one's take on the oddness of the combination, there is no denying the power of Perry's unique mixture of cross-dressing outrageousness and Christian good intent, or the fine acting talent of the entire cast.