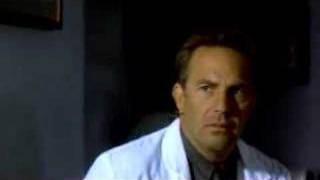 Lush green aerial photography of the Venezuelan jungle stands in stark contrast to the dark and depressing urbanity of American city life where Joe Darrow (Kevin Costner) works as a doctor in the emergency room of Chicago Memorial Hospital. His wife, Emily Darrow (Susanna Thompson), was last seen in a rainstorm in Venezuela, where she was on a retreat with the Red Cross offering humanitarian aid. She vanished in a bus accident. There were no survivors and her body was never found. That rich, green, exotic land is left behind as Joe is challenged to persevere through sad, rainy days back home. Joe promised Emily that if anything ever happened to her, he would visit her patients in the oncology ward. Strangely, the children seem to know him, and they say they've seen Emily in their near-death experiences. When Joe begins to believe that Emily is trying to contact him from the other side, his coworkers and his neighbor (a staunch Kathy Bates with a sterling buzz cut) warn him that grief can be a heavy burden to bear.

Featuring a handful of frightful moments, an unexpected action sequence, and many emotional dialogues, DRAGONFLY is a pensive movie about coping with death and questioning the possibility of the afterlife. Some of the best scenes of the film involve the hilarious and bizarre Linda Hunt, who plays Sister Madeline, an intense little nun with a bad rep who is plagued by tabloid journalists.

What Lies Beneath
$6.80 Super Savings
Add to Cart