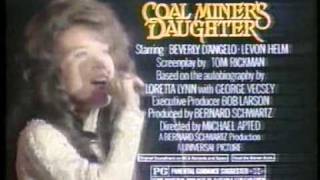 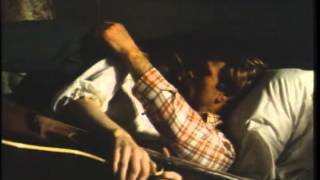 "If you born in the mountains, you got three choices: coal mine, moonshine, or moving on down the line."
- Lee (William Sanderson) to Doolittle (Tommy Lee Jones)
"This pie ain't the only thing salty about you."
- Doolittle to Loretta (Sissy Spacek)

The story of Loretta Lynn, COAL MINER'S DAUGHTER charts the rise of the queen of country music from her upbringing in backwoods Appalachia to stardom at the Grand Ole Opry. One of eight children, she married at age 13 and was a mother of four at age 20. Shy and naive, she was pushed into music by her husband, Doolittle, who gave her a guitar instead of a ring for their wedding, in what was to be a career that also tracked her complicated relationship with this man. His strengths helped her create numerous hit singles, but his weaknesses inspired such immortal songs as "You Ain't Woman Enough to Take My Man." Sissy Spacek won an Oscar for her virtuoso performance, mimicking Lynn's voice nearly perfectly, while Beverly D'Angelo solidly impersonates Patsy Cline; unlike other music biographies, this film features both actors using their own voices in the singing scenes. Country music legend Ernest Tubb also makes a cameo. For director Michael Apted, COAL MINER'S DAUGHTER is one in a series of films--AGATHA, GORILLAS IN THE MIST, and NELL--he has made about strong, eccentric women.

This biographical drama of Loretta Lynn, country music's grand dame, traces the highs and lows of her career from rustic Appalachia to stardom. The film, directed by the English director Michael Apted (NELL), stars Sissy Spacek in an Oscar-winning performance as Lynn. Tommy Lee Jones plays her husband, Doolittle, and Beverly D'Angelo appears as Patsy Cline.