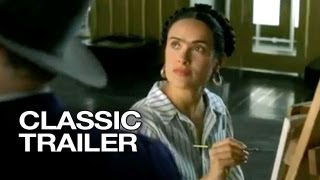 Brilliant colors that bring Frida Kahlo's Mexico City to vibrant life combine with a captivating performance by Salma Hayek to make director Julie Taymor's FRIDA a fascinating film. Starting and ending with Frida on her deathbed, the film spans the famous painter's life from her teenage years to her death at the young age of 47. From start to finish, Frida is portrayed as a relentlessly energized, self-righteous, headstrong, assertive woman. At the age of 18, Frida was horribly injured in a bus accident. Though she learned to walk again, she lived her life in physical agony, enduring multiple surgeries, and eventually needing a wheelchair. Yet her condition did not stop her from having an exciting, tumultuous life as the wife of famed artist and womanizer Diego Rivera, who mentored her in her own work and encouraged her passions. Frida had liberal views and socialist politics. She was bisexual and promiscuous. She drank, abused painkillers, sang and danced, and fearlessly poured her pain and beauty into her paintings. Taymor has created a lively and dramatically emotive film with FRIDA, capturing her endearing resiliency with color, music, and, of course, art.