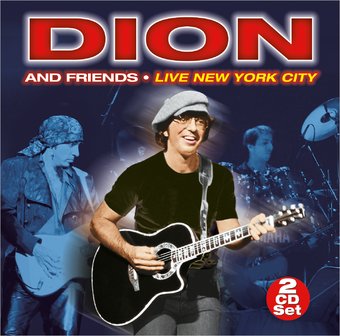 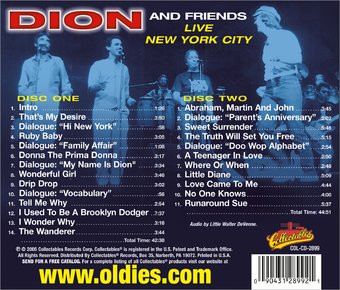 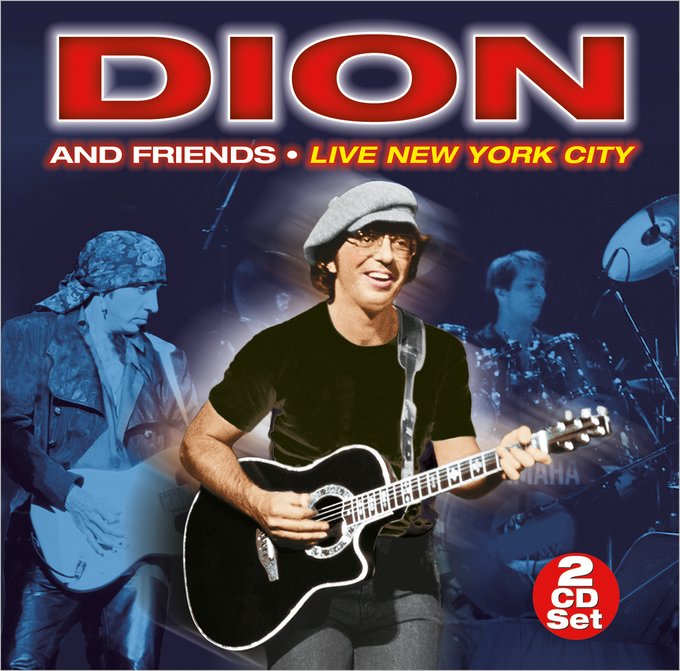 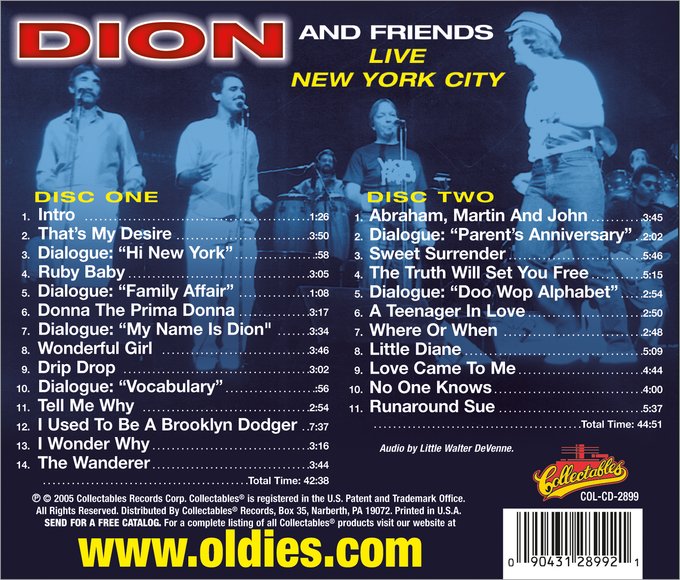 The 1987 comeback performance - now available for the first time! Joined by Little Steven Van Zandt, Phoebe Snow, Paul Shaffer, Felix Cavaliere and Darlene Love, Dion performs songs from his remarkable six decade career with the showmanship and energy that made him a superstar. Recorded live at Radio City Music Hall. Includes liner notes written by Dion, containing photographs from his own personal collection.

Dion: Dion (vocals); Steven Van Zandt (guitar, background vocals); Darlene Love, Felix Cavaliere, Paul Shaffer, Phoebe Snow.
Personnel: Jimmy Vivino (vocals, guitar); Jerry Vivino (saxophone); Ronnie Lawson (piano, keyboards); Leo Adamian (drums); Walter Santos (congas, percussion); Carlo Mastrangelo, Tommy Moran (background vocals).
Recording information: 1987.
Photographer: Susan Dimucci.
Arranger: Jimmy Vivino.
In 1987, Dion was asked to headline a concert celebrating the 15th Anniversary of WCBS -FM in New York. Dion had been making gospel records in the 1980s, and the opportunity to perform with old friends and family was too great to resist and he agreed. This double-disc set is the complete concert from that evening. At over 35 songs, Dion is in fine voice. The story is on the tape, and in the magic of the performances. With a ten-piece band, the poet of the Bronx runs through his many classics, from "Ruby Baby" to "Donna the Prima Donna," to "Tell My Why," "Little Diane," "The Wanderer," and even "Abraham, Martin and John." Ever the premier showman, DiMucci dialogues with the audience, and pulls out other hits from rock & roll's golden era including "Teenager in Love," and peppers the set with his gospel hits. The encore is, of course, "Runaround Sue," which includes a host of special guests including Paul Shaffer, Little Steven, Felix Cavaliere, and Darlene Love. There is nearly two hours of music here, all of it played by a crack band with a startlingly rigorous frontman. This may be a nostalgia set, but Dion and his fellows play the music here like everything is at stake all over again, like it was all new and coming out of the hopper and being laid down for the first time. This is a fine surprise from Collectables. ~ Thom Jurek


If you are a fan of Dion, as I am, then you have to have this album in your collection. It is an intimate and personall concert and very much of its time. I doubt you will be disappointed.


I received my Dion Live NYC CD today Jan. 3, 2006. What great service, it took only 1 week after ordering it to arrive.
The sound is excellent and I love all the dialogue.
I drove around town listening to it over and over. In fact I played it sooooo much I had to clean my CD player.
A very satisfied and happy customer.


I was 16 in 1987 when I sat in the last row at Radio City Music Hall to see the king of my city.
When the stage had risen, I was in heaven.
Even though Dion didn't go anywhere, he "came back" to rock, to New York, to home.
Listen to the intro by Cousin Brucie, to the warmth and range of Dion's voice, to the acceptance of the audience.
This is the rare chance to hear "No one knows" and "Wonderful Girl" live.
This night was special and it's great to have it on cd. If you've never seen Dion live, add this to your collection, because I believe if it wasn't for this show, we wouldn't have the Dion we have today.
This album shows why he is the "King of the New York Streets".