NOFX The Greatest Songs Ever Written: By Us 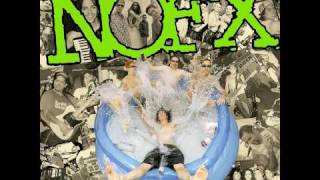 Recording information: Motor Studios; West Beach Recorders.
Photographers: Brian K. Wynacht; John Carder Bush ; Lisa Johnson; Adam Deluca; Brian Archer.
Twenty years is a long time for any band, let alone one that plays jocular warp-speed anthems with titles like "Party Enema" and "Green Corn." Nevertheless, here it is, NOFX's typically self-deprecating Greatest Songs Ever Written: By Us. Entertaining liner notes trace the combo's history in photos, drawings, Xeroxed show bills, and Fat Mike's own scribbled narration; 26 tracks take you from NOFX's first full-lengths in the 1980s through their somewhat surprising, yet still snarky political awakening with 2003's War on Errorism. ("Franco-Unamerican" rhymes "Michael Moore" and "Awful Truth" with "Public Enemy" and "Regan Youth.") As the entire release is an admission of their age, it's no surprise that Greatest Songs Ever's lone new song grapples with the relevancy of playing punk music to quitting drinking and getting old. But the comp also proves the consistency of Fat Mike's songwriting, with highlights including "Linoleum," "What's the Matter With Kids Today," "Thank God It's Monday," and "It's My Job to Keep Punk Rock Elite." While the nonchronological set order is a little trying, and there's nothing from the band's earliest 7"s, Greatest Songs Ever Written: By Us is still a fun look back at NOFX's colorful career, and a validation of their veteran status. That has to count for something in the Warped Tour parents' tent. ~ Johnny Loftus