They're in Love Three Times and Three Ways...In One Movie! 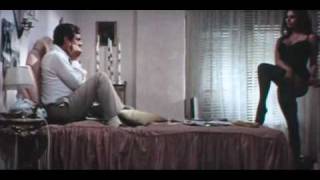 YESTERDAY, TODAY, and TOMORROW from director Vittorio De Sica features the most popular male and female leads of the Italian 20th century cinema, Sophia Loren and Marcello Mastroianni. Directed by Vittorio De Sica (THE BICYCLE THIEF, THE GARDEN OF THE FINZI-CONTINIS), and costumed by Christian Dior, the film exploits the enormous sex appeal of both stars in three short tales set against three historic Italian cities. The first, Adelina of Naples, details the comic trials of a woman caught selling contraband cigarettes to support herself and her unemployed husband (Mastroianni). When her husband discovers that under Italian law a woman cannot be imprisoned until six months after her pregnancy ends, Loren and Mastroianni seize the moment to produce one baby after another. Loren plays Anna of Milan in the second tale, an upper class wife who becomes infuriated when her young lover, Mastroianni, destroys her precious convertible. The film saves the best for last with Loren serving up a heart stopping striptease as a Rome prostitute intent on dazzling a young man headed for the priesthood. When Loren determines to set the young man back on the road to God, she nearly drives her best client (Mastroianni) insane with desire. A wealthy socialite, a black marketeer and a beautiful prostitute (all played by Sophia Loren) use sex in various ways to get what they want.