On every street in every city, there's a nobody who dreams of being a somebody. 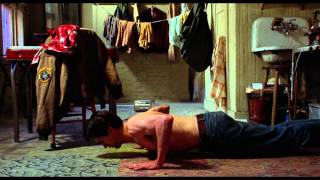 "You talkin' to me'"
- Travis Bickle (Robert De Niro), talking to himself in the mirror.
"No one's safe from the filth; we need to clean the city."
- Bickle
"You talking to me?"

Martin Scorsese's intense film, a hallmark of 1970s filmmaking, graphically depicts the tragic consequences of urban alienation when a New York City taxi driver goes on a murderous rampage against the pitiable denizens inhabiting the city's underbelly. For psychotic, pistol-packing Vietnam vet Travis Bickle (Robert De Niro), New York City seems like a circle of hell. Driving his cab each night through the bleak Manhattan streets, Bickle observes with fanatical loathing the sleazy lowlifes who comprise most of his fares. By day he haunts the porno theaters of 42nd Street, taking his cues from the violent vision of life portrayed in these movies. As badly as Travis wants to connect with the people around him--including Betsy (Cybill Shepherd), a lovely blonde campaign worker, and Iris (Jodie Foster), a prepubescent prostitute he tries to save--his attempts are thwarted and his pent-up rage grows, turning him into a Mohawk-wearing walking time bomb. Scorcese fills Paul Schrader's screenplay with a tragic realism, brilliantly capturing the muck and grime of New York City. De Niro, playing the fragile hero, steps so deep inside his role that the results are deeply frightening. Bernard Herrmann's haunting score--which turned out to be his last--completes the urban nightmare.

This brutal vision of urban decay and malaise has justifiably become one of Martin Scorsese's most celebrated films. Robert De Niro plays Travis Bickle, a cabdriver and Vietnam vet whose mind slips even further into insanity after being rejected by an attractive campaign worker (Cybill Shepherd). As he plots the assassination of her party's candidate, he finds himself trying to rescue a 13-year-old prostitute (Jodie Foster) from her vicious pimp (Harvey Keitel). Scorsese and De Niro once again team up to bring Paul Schrader's powerful script to life with this classic psychological thriller.