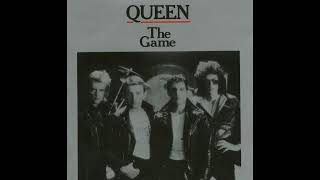 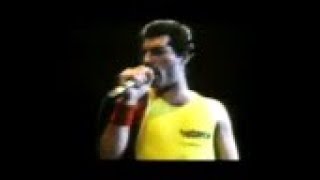 Queen - Another One Bites the Dust (Official Video) (Music Video)

Queen: Freddie Mercury (vocals, piano, synthesizer); Brian May (vocals, guitar); Roger Taylor (vocals, drums); John Deacon (bass).
Recorded at Musicland Studios, Munich, Germany.
Following up the most idiosyncratic album of their career (JAZZ), Queen makes the transition here from weird pomp-rock band to weird pop band, marking a new musical direction for their '80s output. The major development here is the incorporation of funk into Queen's already-broad stylistic pallete. The mega-hit "Another One Bites the Dust" is based around an irresistibly funky bass riff that would be sampled by countless rappers over the next two decades. "Dragon Attack" mixes the funk quotient with some fiery guitar heroics from Brian May.
The pure pop aspect of Queen's music blossoms into full flower as well. "Need Your Loving" could be a Badfinger or Records out-take. "Crazy Little Thing Called Love" predates (at least in the U.S.) the Stray Cats-led rockabilly revival of the early '80s. There are hints of late-period ELO on "Coming Soon." On "Rock It" the band shows that they still know how to pull out all the rock & roll stops. THE GAME is arguably Queen's most artistically successful, fully realized work.
THE GAME found Queen at the top of their craft and the top of the charts, with two number-1 singles ("Crazy Little Thing Called Love" and the Chic-inspired "Another One Bites The Dust"). It also featured the first appearance of a synthesizer on a Queen album.