A comedy about one bride, two grooms, and a wedding party you won't believe.

44K ratings
Currently Out of Stock: We'll get more as soon as possible
Notify Me When Available
Add to Wishlist
Format:  Blu-ray
sku:  XD 23319BR
Also released as:
Honeymoon in Vegas for $8.40
91% recommend us! 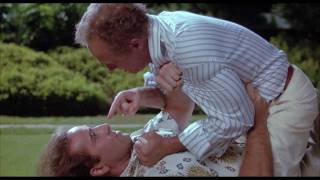 Before Jack and Betsy take the plunge to become man and wife, Jack loses her in a poker game. In a wild, love-crazed pursuit to win her back, Jack flies from Vegas to Hawaii and then back to Vegas again hitching a return flight with the "Flying Elvises" (a group of sky-diving Elvis impersonators).

Private detective Jack Singer promised his mother, on her deathbed, that would never marry. Now, his girlfriend Betsy is threatening to leave him if he doesn't marry her. Jack decides, despite his fear and guilt, to give in to Betsy's demands. They fly off to Las Vegas where, in an attempt to postpone the wedding, Jack joins in a "hospitality" poker game with professional gambler Tommy Korman, who cheats Jack out of $65,000. Tommy offers Jack a deal: if Jack lends Tommy his girlfriend -- who coincidentally is the spitting image of Tommy's dead wife -- Tommy will forget about Jack's debt. Jack convinces Betsy to go along, and then, worried that he might lose Betsy forever, frantically tries to break up their weekend.