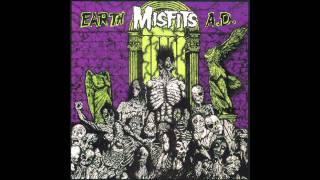 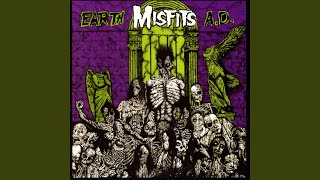 Contains the EPs EARTH A.D./WOLFS BLOOD and DIE, DIE MY DARLING.
The Misfits: Glenn Danzig (vocals); Doyle (guitar); Jerry Only (bass); Robo (drums).
Misfits (U.S.): Jerry Only (bass guitar); Glenn Danzig, Doyle , Robo.
Personnel: Glenn Danzig (vocals); Doyle (guitar); Robo (drums).
One of the most brutal and uncompromising records of the 1980s, EARTH A.D. stood as a fitting coda to phase one of the Misfits' career and presaged the darker, occult-influenced work Glenn Danzig would explore with Samhain and Danzig. Influenced by the frenzied vocals and blitzkrieg guitars of the burgeoning hardcore movement, the Misfits adapted their sound (think Elvis meets The Cramps at a doo-wop show) without diluting the poppy hooks, preoccupation with science fiction and horror films, and "whooa-oooh!" vocals that served as the band's trademarks.
Although songs as brutal as "Demonomania" and "Death Comes Ripping" are sure to shock those attracted to the Misfits for their goofier material, EARTH A.D. does have its share of tuneful moments. Those include the romantic "Die, Die My Darling" (later a minor hit when covered by Metallica) and the reassuring "Mommy, Can I Go Out and Kill Tonight?" But overall, the ferocious pace of EARTH A.D. never relents. Many have tried to make a record as dark and menacing as this one (Danzig himself for one), but few have even come close.

New
Strung Out
Another Day in Paradise
$14.60
Add to Cart