Prince of Space / Invasion of The Neptune Men (Double Feature) 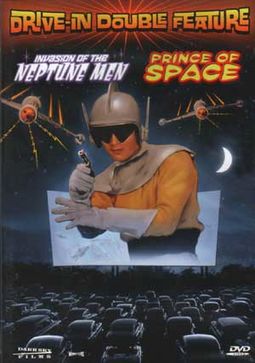 Prince Of Space (aka "Yusei Oji," aka "Starman"):When aliens from the barren rock planet Krankor attack Earth, only the curiously-costumed Prince Of Space (Wally the shoeshine boy in disguise) and his trusty exhaust-spewing rocketship can save the world - or at least Japan - from total conquest by the evil Phantom and his beak-nosed minions. Since conventional space weapons cannot harm the spry Prince of Space, the Phantom engages in a kidnapping scheme involving a cadre of international scientists.

Invasion Of The Neptune Men (aka "Uchu Kaisoku-sen," aka "Space Greyhound"): In another case of galactic conquest, clunky metallic aliens from the planet Neptune invade Earth - or at least a quaint field in rural Japan - only to have their efforts thwarted by caffeinated superhero Space Chief (venerable action hero Sonny Chiba of Kill Bill and The Streetfighter fame), who travels from one head-scratching situation to another in his space car, when not befriending a group of geeky boys.

PRINCE OF SPACE: A strange race of birdlike creatures attacks Earth in this 1964 B-movie, with only the Prince of Space able to thwart them and their devious plan to take over the world.

INVASION OF THE NEPTUNE MEN: This amusing feature stars Sonny Chiba (KILL BILL VOL. 1) as a heroic figure trying to save the world from invading aliens who hail from Neptune.