Rocket to the Moon

Love-starved moon maidens on the prowl! 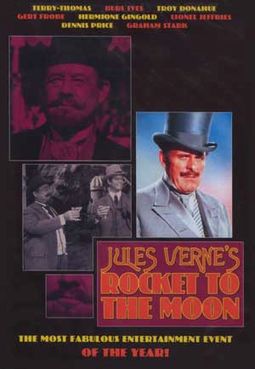 This grand comedy is propelled by an all-star cast--including Terry-Thomas, Lionel Jeffries, and Gert Frobe--and is anchored by Burl Ives as the egregiously in-debt huckster Phineas T. Barnum. In an attempt to flee creditors, Barnum leaves 1875 America and sets up shop in England, where he takes a page from the writings of Jules Verne and forms a syndicate of wealthy men to plan and finance a flight to the moon.

Inspired by the writings of Jules Verne, this hugely entertaining comedy boasts an all-star cast headed by Burl Ives, Terry-Thomas, Lionel Jeffries and Gert Frobe. In 1875, showman extraordinaire Phineas T Barnum (Ives) flees his native America ahead of a hoard of clamoring creditors to set up shop in unsuspecting England. He immediately decides to form a syndicate, headed by the wealthy, but somewhat stupid Lord Barset (Dennis Price), to finance the first flight to the moon. They attempt to blast their rocket into orbit from a massive gun barrel built into the side of a Welsh mountain, but money troubles, spies, and saboteurs ensure that the plan is doomed before it starts.

19%off
The Dukes of Hazzard: The Beginning
$12.10 Super Savings
Add to Cart