Smiles of a Summer Night 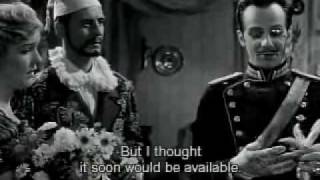 Smiles of a Summer Night - trailer

SMILES OF A SUMMER NIGHT is an enchanting comedy of manners with a satirical edge. Set on a country estate at the turn of the century, it features eight people, including an actress, a sophisticated aristocratic couple, a lawyer and his virginal wife, and a spirited young maid who, during the course of one evening, change partners several times and engage in multiple romantic trysts. Full of subtle eroticism and wit, Ingmar Bergman's romance proposes that falling in love (or lust) beyond the parameters of social convention is not only unavoidable at times but it might even be the key to personal happiness.

This romantic comedy, written and directed by Swedish filmmaker Ingmar Bergman, was inspired in part by Shakespeare's A MIDSUMMER NIGHT'S DREAM and later became the basis for both the musical A LITTLE NIGHT MUSIC and Woody Allen's A MIDSUMMER NIGHT'S SEX COMEDY. The principal events take place at a turn-of-the-century manor house where Desirée Armfeldt (Eva Dahlbeck), an actress, and her aging mother are giving a party. Two of the invited guests--Count Malcolm (Jarl Kulle) and Fredrik Egerman (Gunnar Björnstrand), a middle-aged lawyer--are romantically involved with Desirée, a cause for murderous jealousy between the two. Meanwhile, Egerman's youthful wife, Anne (Ulla Jacobsson), who has thus far repulsed all sexual advances on her husband's part, is showing a considerable interest in her stepson (Björn Bjelvenstam)...During the course of the evening, various alliances are formed and dissolved, partners are switched, and all the guests take part in the resulting erotic escapades and intrigue--but in the end, everyone finds their true love. This is lighter, airier fare from a director often associated with existential angst and despair; nevertheless, Bergman's spicy, sophisticated movie received rave reviews and earned him widespread critical acclaim.