A lot can happen in the middle of nowhere. 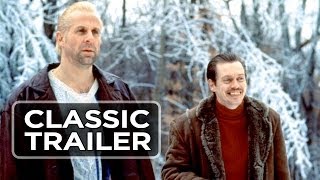 "Yah'" "Yah."
- just about every character in the film, at one time or another
"Oh--I just, I think I'm gonna barf."--Marge Gunderson (Frances McDormand)
"Geez, you okay, Margie'"--Lou (Bruce Bohne)
"I'm fine--it's just morning sickness....Well, that passed."--Marge
"Yah'"--Lou
"Yah. Now I'm hungry again."
- Marge
"Say, Lou, ya hear the one about the guy who couldn't afford personalized license plates so he went and changed his name to J2L 4685'"--Marge
"Yah, that's a good one."
- Lou
"Okay, so we got a trooper pulls someone over, we got a shooting, these folks drive
by, there's a high-speed pursuit, ends here, and then this execution-type deal."
- Marge
"Just keep it still back there, lady, or we're going to have to, you know, shoot you."
- Carl Showalter (Steve Buscemi)

Poor Jerry Lundegaard. He's deep in debt. His wealthy father-in-law has no respect for him. He cheats customers at the car dealership where he works. And now he's hired a bumbling duo to kidnap his wife--a plan that goes horribly awry, leading to homicide. Enter Marge Gunderson, one of the most fabulous movie cops in film history. The very-pregnant Marge--played marvelously by Frances McDormand in an Oscar-winning and career-defining performance--just goes about her everyday business, eating (in nearly every scene), talking to the people in the community, and examining bloody corpses as if no day is different from the next. A multiple murder in the small town of Brainerd, Minnesota--home of Paul Bunyan, as the sign claims--seems to have little effect on her. Yet she has an innate cop sense--she is very, very good at her job and determined to solve the case in her offhanded manner.

FARGO is yet another offbeat, highly entertaining film from the Coen brothers (BARTON FINK, BLOOD SIMPLE). The film is nearly colorless; instead, director of photography Roger Deakins washes the screen in the blinding white of the snow, occasionally breaking for the drab grays and browns of police uniforms and winter jackets. Carter Burwell's score further enhances the slow, steady pace of this oddly funny and compelling film. The Coens have once again populated their film with a slew of bizarre characters, with outstanding performances delivered by all, particularly the edgy William H. Macy, the quietly luminous McDormand, the nearly psychotic Steve Buscemi, and the oh-so-cold Peter Stormare.

The Coen brothers' black comedy revolves around a crime orchestrated by a desperate, debt-ridden man--and its unexpected results. In dire need of money, Jerry Lundegaard comes up with a plan: Hire two thugs to kidnap his wife, Jean; make Jean's rich father shell out the ransom; and then use the money to pay off both the kidnappers and his creditors. But what appears to be the perfect crime goes seriously awry when the goons murder three people after abducting Jean. As a result, they soon have an intelligent--and very pregnant--police chief named Marge Gunderson investigating the clues they've carelessly left behind. The criminals must now collect the ransom before Marge puts all the pieces together...but that turns out to be a lot harder than they thought.


This is a fantastic film. It is bizarre, to say the least, but is roaring good fun, and sort of mind-boggling, in the unexpected twists and turns the plot takes.

All the characters are excellent - especially Frances McDormand, and Steve Buscemi is totally out of sight.

They are both perfectly cast for the characters they play.