Turn It Up R

How you gonna win? 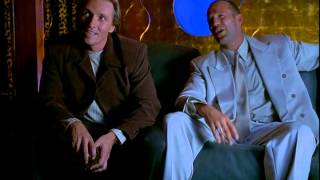 Rapper Pras Michel (of the Fugees) stars in this tale of a gifted young musician with big dreams. Partially based on Pras's autobiographical book and album GHETTO SUPASTAR, the story also features other real-life musicians, such as Ja Rule, Faith Evans, Bootsy Collins (who plays himself), Harry-O, and MTV host DJ Skribble. Pras is Diamond, who's involved in the drug world with his childhood best friend Gage (Ja Rule), but wants to get out and be legitimate in order to to pursue his musical career. Gage believes in Diamond, but knows they need money to get anywhere, and he's willing to do anything to get it. His impulsive hotheadedness soon gets both men into more trouble than they can handle, compounded when Diamond's girlfriend announces she's pregnant. When Diamond's estranged father comes back into his life after the sudden death of his mother, they find common ground in the music they both love. But Diamond's pulled in two directions: toward his dreams, his girl, and his family, and toward his loyalty to his best friend. TURN IT UP is a gritty, realistic portrayal of urban life and undying dreams.