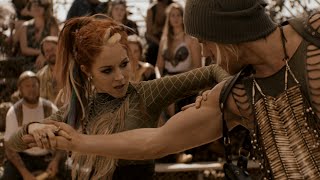 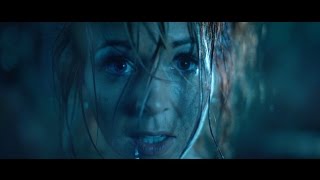 Lindsey Stirling's third album, Brave Enough, is where her crossover sound falls nicely into place. Her first two efforts -- thrilling collisions of violin acrobatics and electronic embellishment -- were novel, but there was something missing to that new age dubstep. On Brave Enough, Stirling taps into a deep well of pain -- inspired by her own emotional maturity and the death of her best friend and keyboardist, Jason Gaviati, in November 2015 -- and the result is an organic interplay between her instrument and digital beats that focuses more on pleasant rhythms than dubstep muscle. Each song is a step through the processing of pain, an emotional roller coaster that finds Stirling on a journey to face the darkness and find a way to carry on. The ethereal "Lost Girls" cleanses Stirling's confusion with a Celtic raver. From there, a handful of guests assist in conveying Stirling's thoughts. Christina Perri adds her effective sentimentality to the title track, mirroring Stirling's soul with lines like "There's some things I should have said/I was too afraid/It was just so hard to let you know/Now it's all too late." From there, Stirling enters "The Arena" to get dirty with her demons, before rising from the ashes on the explosive "The Phoenix," which is what one might imagine if Nero hired a classical violinist. Shiny Toy Guns/Versant vocalist Carah Faye conveys Stirling's faith and trust in God on "Where Do We Go," while country duo Dan + Shay step out of their boots for a shimmering dose of nostalgia on "Those Days." Blues-rocker ZZ Ward adds gritty soul to the empowering "Hold My Heart" and Andrew McMahon carries the torch even further with the adventurous "Something Wild." Weezer's Rivers Cuomo and Christian rapper Lecrae appear on "Don't Let This Feeling Fade," but their star power never overshadows Stirling. On an album without a skippable track, the standouts are big moments like the tropical-trap jam "Prism" and the propulsive glory of the unique "Mirage" with Indian-American femcee Raja Kumari. Over 13 tracks of rousing violin stompers, Stirling continuously proves that she can party just as well as she can stir the soul. However, on the closing number, Stirling releases a wallop of sentiment. "Gavi's Song" is somber and mournful, a sweeping piano-violin gem that she began writing with the late Gaviati, later finishing it on her own. It's a quietly devastating heartbreaker that manages to lift the spirit with a tiny sparkle of hope. It ends with a faint recording of a demo session with Gavi, his voice the final sound on the album. It's a fitting tribute on an album infused with his spirit. That heart is central to what makes Brave Enough so successful: it's not just about cool crossover sounds anymore, it's about hitting that emotional target. Stirling and company pull it off quite nicely and Brave Enough ends up being one of her most listenable, enjoyable, and emotionally satisfying efforts. ~ Neil Z. Yeung

15%off
Soundtrack
Stranger Things (Music From The Netflix Original Series...
$23.70
Add to Cart

Lindsey Stirling
Warmer In The Winter
$25.90
Add to Cart

Lindsey Stirling
Warmer In The Winter
$25.90
Add to Cart